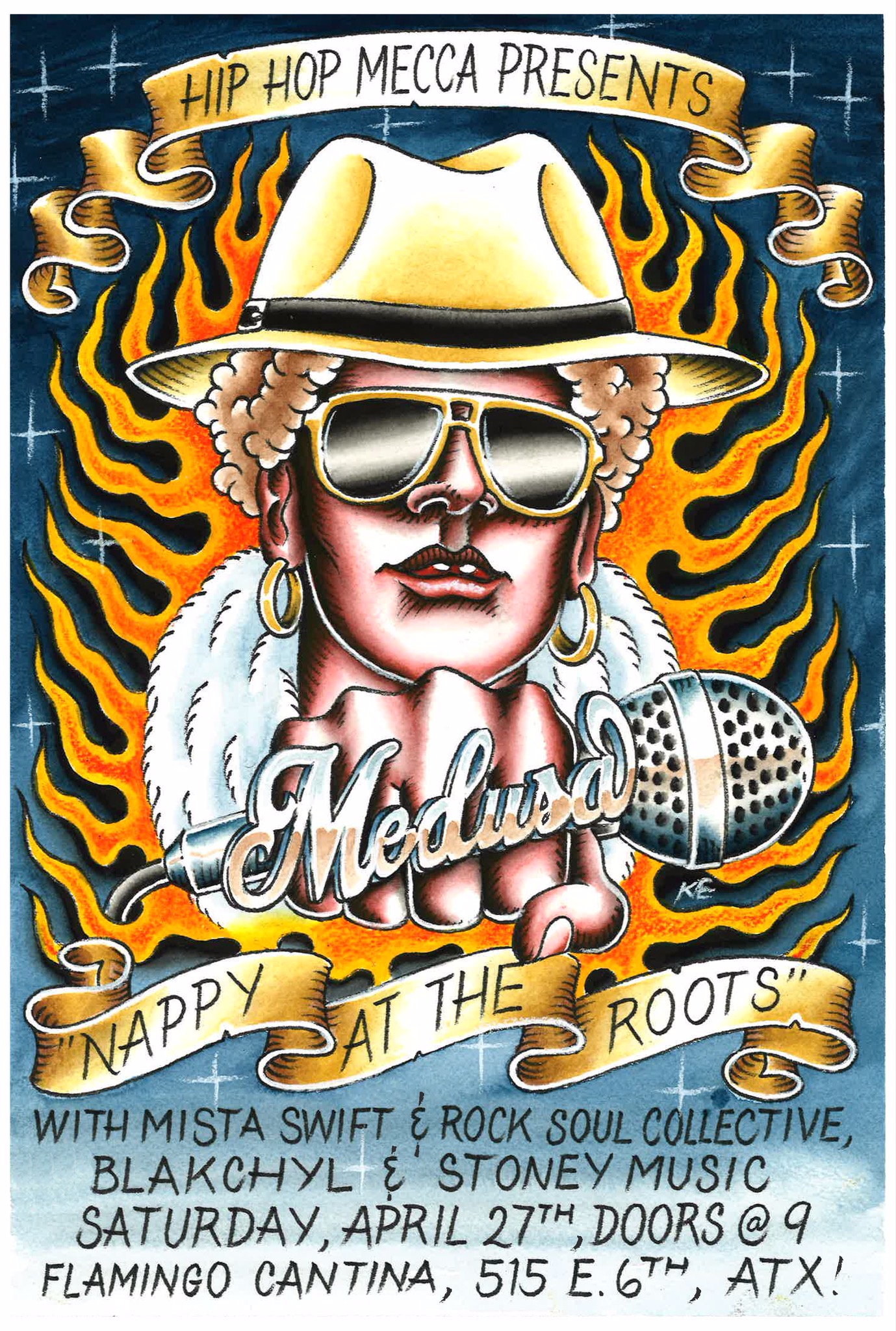 *** “In one of the rooms in the hip-hop culture house engraved on the walls” Is a live account of the 1 Super Soul Sista, who has the blessing to be dubbed “the Angela Davis of hip-hop”. Starting off MCing as a 16- year old pop-locker, Medusa continues to cultivate hip-hop seeds across the country in unprecedented numbers.

The love of hip-hop encouraged her to follow higher callings than her knowing. Pop-lockin with the Groove-Atrons gave her talents a platform to win the Beset Female Dancer in the 1st Hip Hop Dance Awards at The Palladium. “Medusa has been compared to a medley of amazing artist” Including, Gil-Scott Heron for their ways of expressing the revolutionary state of mind, Chuck D. (imagine a female Chuck D.), Lauren Hill for having the ability to posses an international talent in the voice world and like the Game, who’s a versatile heavy hitter on speaking his life’s truth’s, Medusa gives you the key to real truth and allows you to feel it and even though the comparisons could go on, Medusa is on a Goddess list of her own.

You will find no other who will bring it to you like this, someone’s music that makes you feel strong, proud, and encourages with the manner of ONE Love. “Coming up in the LA scene, she honed her skills” At the Good Life café and Leimert Park’s “Project Blowed” Workshop, around Freestyle Fellowship, Black Eye Peas, Macy Grey, and Xzibit, being the first in the LA hip hop scene with a live band. After blessing her already growing fans with her EP, “Do It The Way You Feel It”, Medusa gained an even stronger fan base overseas, in the country, on college campuses across the nation, and has virtually become a guru to the underground hip-hop scene and artistic community.

She is respected and adored as a Queen to the word and power of her music and what she stands for, not just the fact that she’s the undisputed Queen of West Coast underground hip-hop. “Medusa has shared the stage and opened for lyrical heavyweights” Such as: Stevie Wonder, KRS-ONE, George Clinton, Dead Prez, Dave Hollister, Chali 2Na of Jurassic 5, Super Natural. Public Enemy, Blackalicious, Erykah Badu, Roy Ayers, Dilated Peoples, Speech, Common, Pharoahe Monch, Meshell Ndeegeocello, Fishbone, MC Lyte, Bahamadia, and Blk Thought of the Roots. That’s not even including the blow up in Honolulu for the “Girl Fest,” a festival that dedicated an entire day honoring Medusa and her accomplishments in music.

She performed at Bruce Willis’s Annual Christmas Show where she brought in the New Years with Talib Quali, Shante Moore and Kenny Latamor and the 2002 Smoke Out with Cypress Hill.. “She has earned herself a gold album” In Japan with Spiritual People, a project in collaboration with Arrested Development’s Speech.

She has also received a Grammy with the band Ozomatlu and LA Weekly has voted MEDUSA “BEST HIP-HOP ARTIST” two years in a row. She was part of the hot line up for the Beats for Peace Tour with Slum Village, Pharoahe Monch, Anwar Superstar, The Jazz and Hip-hop Orchestra, Super Natural, and Cee-Lo.

The Year before that she was a t the Bumper Shot with De La Soul, Macy Gray, Common, and the Black Eyed Peas in Seattle, Washington. Selling out at every venue and killing the mic on every stage, holding it down independent-indie style hasn’t been hard when you’re doing it for the love of music, the reason and unity. “If you haven’t heard her LIVE band Feline Science then you haven’t heard the half of it. “ Medusa and Feline Science (consisting of a DJ, drummer, bassist, keyboard, percussionist, guitar and background singers) rocks the stage like Sly & the Family Stone taking the rap community by storm! If Aretha Franklin is the “Queen of Soul”, then Medusa is Definitely the High Priestess of Hip-Hop, having won the Rap Sheet Emcee World Championship hands down! “MEDUSA’s skills are not limited to music.” “She has played her behind the scene talent in film scoring, soundtrack production and acting.” Such credits include “Life Is A Traffic Jam,” featuring the late Tupac Shakur, in Vondi Curtis’s film “Gridlock” and in the sitcom “Moesha” where MEDUSA made an impact on the world as Lady Lunatic.

She wrote, produced, and performed “My Momma Raised a G” for the HBO film “Stranger Inside” in which she played the role of Leisha, and doing voiceovers in “Sistas N The City” playing as Athena. Giving her light and wisdom in the films “No Body Knows My Name” by Rachel Ramose w/ Asia One, T-Love and DJ Symphony and “Soundz of Spirit” by Joslyn Rose Lyons w/ Andre 3000, Common, KRS-1, Cee Lo, Davey D., Talib Kwelli, and Saul Williams. Including the films Freestyle The Art Of Rhyme by DJ Organic winner of HBO Best Documentary, Best Documentary and the film Camjackers that’s a blow out independent film that is taking the film circuit by storm! Also a winner of Best Editing by Ann Arbor, Official Selection of Harlem International and a Tour, both starring, Phoenix Orion, Aceyalone, 2Mex & Mykah –9.

Medusa is also a motivational speaker, being asked to give her knowledge and opinion at colleges and seminars on the effect of hip-hop on children and women, in relations to culture and life, Medusa has spoken the 26th Annual Black Conscious Conference and at UCLA for the African American Music Festival.
Currently Medusa has been asked to be on the Board for the Los Angeles Arts Committee and teaming with arts organization Art Share to bring more Hip Hop to their center. Medusa has also done major features With “The Mackin Game” with Teena Marie and Mc Lyte, on Teena Marie’s new album “La Dona” which also features Gerald Levert and Rick James.

Finishing the hot single “Pimps Down Flo’s Up” for the West Coast Legendary Project featuring Snoop Dogg, Lady of Rage, and E-40 and finally collaborating with MC Lyte to soon release “Lay Down Low” performing with Jean Grae at the Music Fest NW hip-hop conference and Live @ the OP, her accomplishments go on………… MEDUSA is expected to leave the Rap community speechless, but revolutionize the music industry as a whole! Fans are looking for more and almost demanding that her music reaches for all the world to hear!

Medusa stays diligently in the Studio killing the vocal booth with some of the hottest Producers to make master pieces from the Queen, bubblin from the Underground, the illest Hip Hop you’ll ever hear! The anticipation has the fans itching. Medusa blessed the booth for X-Clans Mixed CD and then blessed the mic at X-clan’s “Return From Mecca” CD release party with Cahli 2 Na, Crown City Rockers, Self Scientific. Sliding through Frisco with Abstract Rude and D.J Drez at “Keep the Feel”,

Medusa continues to keep her performance bar up with other performances in other states like Seattle and at local Los Angeles venues like the Music Box, Zen Sushi and the Temple Bar amongst others. Divine Forces Radio asked Medusa to grace the stage at their Anniversary show “Hip Hop for Education” and another infamous show Project Sweatshop puts together “We the People” Loving her flows and energy she got asked to come back to “B-Girl Be”, “Girl Fest San Francisco” and Girl Fest Hawaii!

Entering the year’s first couple of months going to Crime Jazz in Amsterdam and Rotterdam, speaking on a panel at the Urban Network Summit and added to the list for the “Zero Tolerance Tour” & just recently added to the International Soul Music Festival and Billboard R&B Hip Hop Conference,