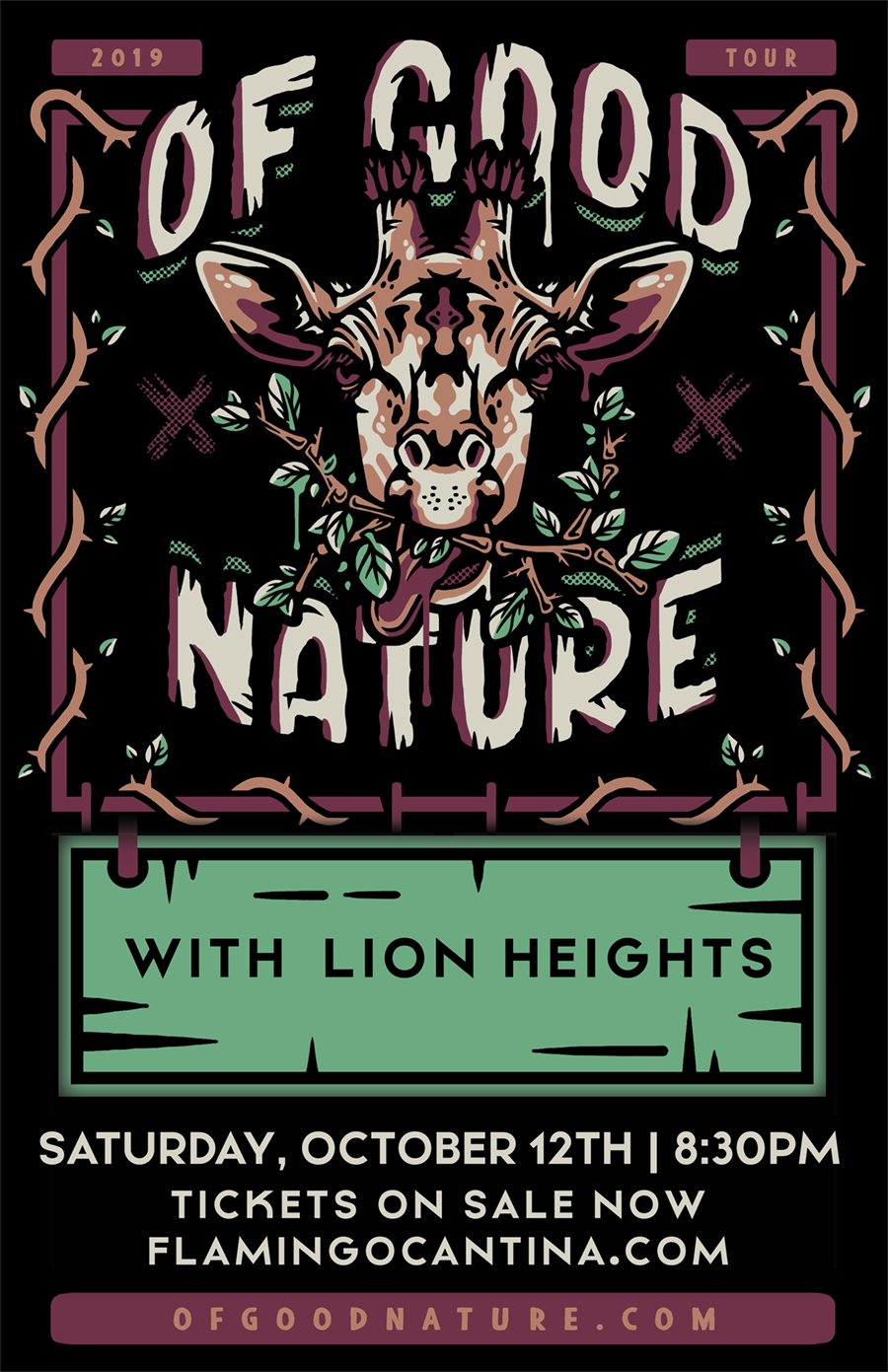 Based in Charlotte NC, Of Good Nature, has received quick attention to their newly released, chart topping music. Reggae, Pop, Rock, and Alternative are more popular descriptions of OGN’s fusion-friendly approach to today’s music, but this group of prolific songwriters strive to explore a range of styles that have lead to a highly accessible sound. Brand new full length album “Timeless” debuted at #1 on iTunes and #3 on Billboard (Reggae Albums Chart) in March 2019. “Take Me Anywhere” has been featured on Sirius XM’s The Pulse, “Feels Right” and “Good Life” are streamed on popular Spotify and Pandora playlists including Happy Songs For The Office, Easy Like Sunday Morning, and Reggae Summer Beach.

Celebrating the successful release of “Timeless” the album, Of Good Nature has announced their partnership with Ineffable Music Group based in Oakland CA. The band is set to already head back to the studio June 2019 with producer/engineer Danny Kalb (Beck, Ben Harper, Foster the People, The Movement) at White Star Sound in Charlottesville, VA. OGN also received recognition for their past studio work, seeing their debut album, Just Add Water, won Indie-Ville’s Reggae Album of the Year and sophomore album Life Worth Livin, debuted at #5 on iTunes Reggae Albums Charts.

Lion Heights – transplanted from Chicago, LH has re-established their roots in Austin as one of the top Roots Reggae acts in Texas, featuring Jeremy Carlson, Dane Foltin, James Campbell and Drae Wilson on drums. The group is mainly influenced by the roots music that was pumping out of Jamaica in the 60s and 70s. However, combining aspects of soul and R&B helps them to introduce reggae music to new audiences. They have independently released one EP (Survival Of The Richest) and a handful of singles. Lion Heights released their first official single “Good One” which was distributed worldwide through label Rebel Sound. “Good One” has since been featured on radio shows all over the U.S. as well as Jamaica and the UK. In 2017, the group released their first full-length record, Same Situation, which has been well-received locally and internationally.

Bum Lucky was born out of the desire to cultivate a distinguished reggae music scene in the Dallas-Fort Worth region. Being located far from the beaches and pot-friendly atmospheres where the genre thrives forced the four-piece to dig deeper in its songwriting and sound — a welcome challenge that thrust the music new heights and enticed bands such as Fortune Youth and Tribal Seeds to play alongside Bum Lucky in their hometown.

The band’s latest EP, Show Some Love, is founded in roots-rock reggae and dub, and tinged with elements from southern rock and blues. The result is a collection of songs as gritty as they are seductive — the music embodies a rebellious spirit that serves as both a call to action and remedy on the dancefloor.

This fresh approach has rewarded Bum Lucky opportunities to share the stage with bands such as the Original Wailers, Lee Scratch Perry, Katchafire, Groundation, the Expendables, the Movement, Sensamotion, Mishka, Tribal Seeds and Fortunate Youth, among others. They’ve been guests at esteemed festivals throughout the Southwest while touring on a rigorous schedule the last several years to spread the gospel of good tunes.