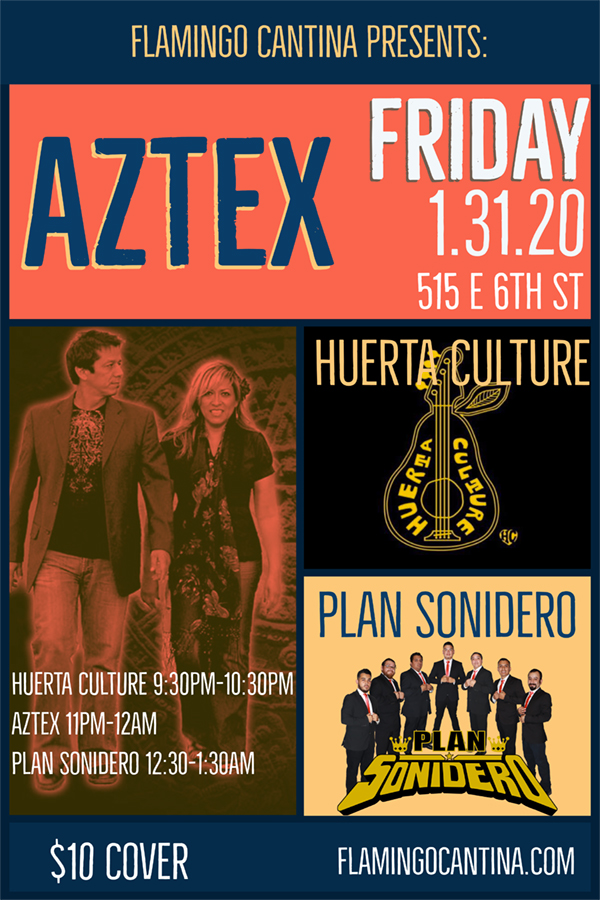 *Aztex draw from roots music all around the world – playing a mixture of Latin Jazz, cumbia, r&b, blues, rock, and zydeco. The band was formed in 1998 by lead singer, Sarah Fox, and accordionist, Joel Guzman. The duo’s stunning performances have propelled them into the national stage, garnering them three Grammy nominations and two Grammy wins in 2004 and 2005.

…Although Sarah is at the top of her game as one of Texas’ leading Latina singers, she easily transcends cultural genres and barriers. She has been compared to Sarah Vaughn and Etta James and is noted for her passionate songwriting, visceral vocals, and dynamic stage presence.

…Joel Guzman began dazzling audiences and fellow musicians with his unique accordion artistry as a child prodigy, causing established and respected accordion players to christen him, at an early age, “El Pequeno Gigante”, The Little Giant. Today, he continues as an accomplished instrumentalist, singer, and performer, and is also a successful arranger and producer.
https://www.facebook.com/AztexMusica/
http://www.aztexlive.com/

*Huerta Culture plays dance music for parties. The band mixes cumbia, ska, reggae, hip-hop, blues, rock, and balkan influences to create a sound that has been dubbed ‘psichocumbia’. With 4 singers in the band sometimes all switching verses throughout a song and singing in English, Spanish, and Quechua (an indigenous language of Bolivia), Huerta Culture keeps arrangements dynamic and eclectic. The phat bass and rhythmic keys are accompanied by a wizard trumpet. Some songs also feature the guacharaca and the Andean pan pipes.
https://www.facebook.com/HueRTa-CuLTuRe-197447283628439/