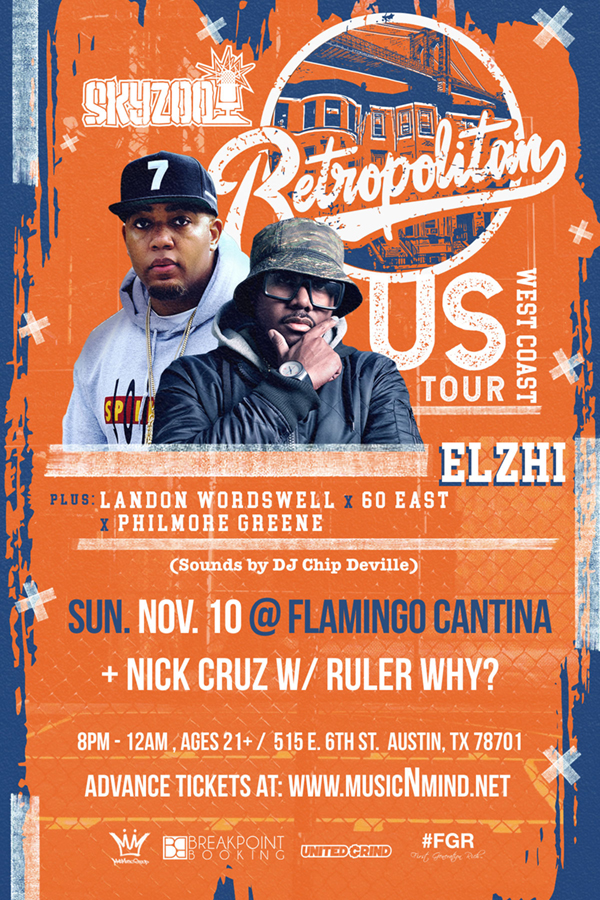 Join the event on FB Here!

About Skyzoo: When rumors spread months ago that Skyzoo had begun working on a collaborative project with the iconic Pete Rock it quickly set social media aflame. While details were scant, Mello Music Group is happy to finally reveal the details and officially announce Skyzoo & Pete Rock’s new album, Retropolitan, with Billboard who premiered the lead single It’s All Good.

It’s All Good finds Skyzoo skating over a beat from Pete’s secret “SP-1200 stash,” and this one in particular was produced in 1994 around the same time as Pete’s Illmatic sessions with Nas.

It is more than an album of beats. & rhymes. It’s two generations of legendary native New Yorkers putting it down and pulling no punches. Skyzoo & Pete Rock use this album to create a love letter and a wakeup call to the city, as they have witnessed its culture stripped away layer-by-layer.

About Elzhi: Before the world ever heard the name Elzhi, the young artist was sitting in the back of classrooms thinking of rhymes and spitting verses, while his friend Fes banged out beats on lunchroom tables and battled rival emcees on the blacktop after school. He sharpened every blade in his arsenal, developing his style to measure up against the competition in Maurice Maloneis Hip Hop Shop, the legendary proving ground for Detroit Artists that has produced some of the greatest emcees in the world. Elzhi spent years paying dues, writing songs, entering battles, and recording demos until he made his international debut on Come and Get It, a standout track from J Dilla’s album, Welcome 2 Detroit. The critically acclaimed song drew massive attention to the mysterious artist, and made his EP, Out of Focus, highly sought after. Following that, he released the critically acclaimed Elmatic as a tribute to Nas as well as to Elzhi’s hometown of Detroit. in 2016 he released his long awaited album “Lead Poison”. Be on the lookout for a new Elzhi album in 2020.