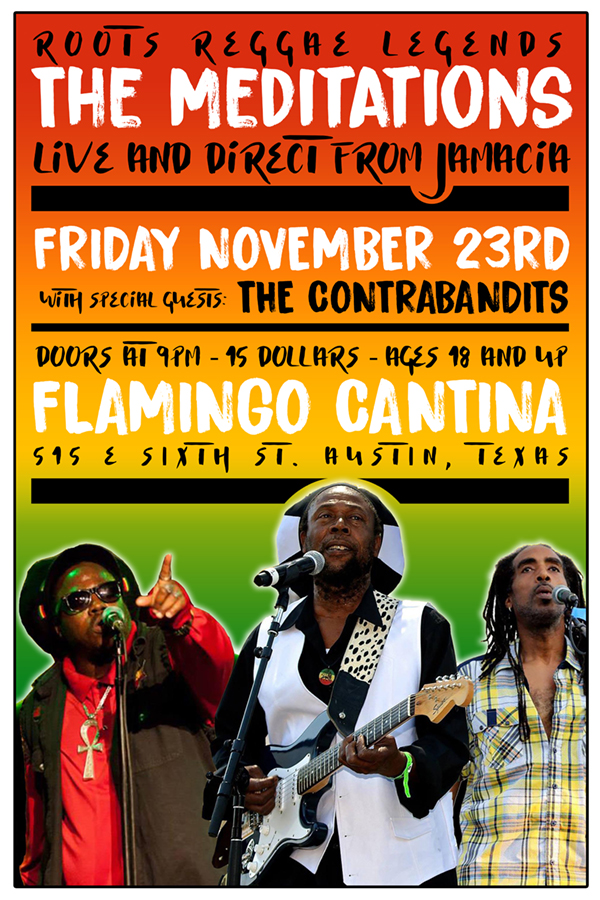 Flamingo Cantina is pleased to present live and direct from Jamaica, roots reggae artist The Meditations, featuring Ansel Cridland. Local reggae favorites The Contrabandits open the show. Doors at 9 p.m., Winston’s Kitchen on hand with delicious Caribbean fare. Show starts at 10:15 p.m. Ages 18 and up with valid id. Tickets will be $15 at the door.

As part of the foundation of reggae music, Ansel “Meditation” Cridland has over forty years producing, writing, arranging, and performing for fans all over the world. As leader of the legendary trio(The Meditations) Ansel and his fellow band members performed at the historical ONE LOVE PEACE CONCERT, held April, 22nd 1978, at the request of Bob Marley. Legends like Jimmy Cliff, Sly and Robbie, Philip Smart, Willie Lindo and Gregory Isaac are a few of the people that Ansel has worked with. These contributions have sculpted the sound of Roots Rock Reggae over the years. Making The Meditations a fundamental and essential part of reggae music.

Over the past few years Ansel (who has produced all of The Meditations’ albums excluding three) have been the only remaining original member of The Meditations to continue touring. Accompanying him for almost 10 years, as background vocalist are Laury Webb(who is also featured on The Good Of Man album) and DaddyLion Chandell. Together, they’ve been touring the United States performing for massive crowds at venues like the Red Rock Amphitheater twice in seven years. And returning in 2013, to celebrate Reggae On The River 30th year anniversary. A festival first opened by The Meditations and The Itals.

Criss crossing the United States year after year, embarking on journeys over waters to Africa in an attempt to quench the thirst for Meditations Music. On January 29, 2010 Ansel performed for exhilarated fans at The Parker Place(in Abidjan, Ivory Coast), which due to the demand, resulted in being two events instead of one. This amazing experience produced a great live album, titled Ansel Meditations Live In Africa. This album is

of legendary proportions to say the least. Its Roots Reggae at its finest. Its raw and filled with uncut material, capturing a monumental moment in time.

There’s most definitely a thirst for Roots Rock Reggae and that authentic Meditations sound. It’s by no means new but it’s growing in volume with every generation. The love is overwhelming and it’s an inspiring experience to see The Meditations live.