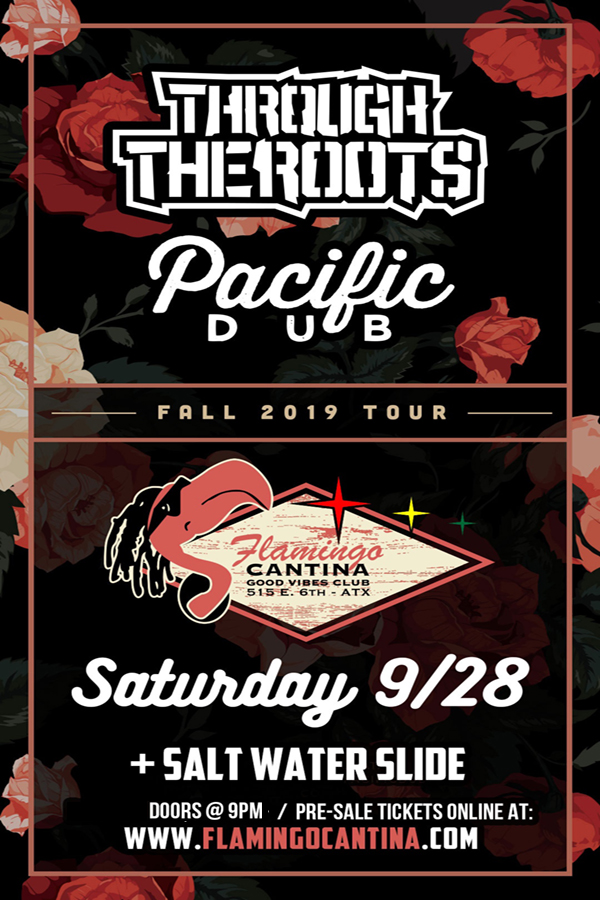 JOIN THE EVENT ON FB HERE!

Through The Roots:
From what was once a dream inspired by close friends, to humble beginnings filled with living room jams, late nights writing songs in the garage, backyard houseparties and countless complaints from neighbors, San Diego-based reggae/rock band Through The Roots was born.

By coincidence in early 2008, Evan Hawkins and Taylor Boatwright met at a local guitar center. It was there that Evan shared his vision with Taylor, which eventually led to the beginning of TTR.

Evan and Taylor came from different musical backgrounds but shared some similar musical tastes, and both were very moved by reggae. They believed TTR would provide them with the perfect vehicle to spread their message and adopted a Cali reggae/rock concept.

In late 2008, Through the Roots added Brady O’Rear to round out the group’s core. He brought his own musical tastes, complete with Hawaiian Islands reggae, and mixed them with those of Evan’s and Taylor’s to give TTR a broader range of ideas and influences to draw from.

Through the Roots quickly moved from the streets and backyard shows to touring in 2010 and soon hooked up for West Coast and national tours with some of the reggae/rock genres top headliners. The San Diego band eventually added Corrick Watson (lead guitar/vocals) and Budda Foster (bassist/keys) from Los Angeles to the talented, five-man mix.

With the band set, Through the Roots looks forward to continue spreading its positive messages, and showcasing its high energy shows to a growing legion of fans.

Pacific Dub
Coming from Surf City USA, Pacific Dub resides in Huntington Beach which is nestled nicely in southern California’s Orange County. Other bands such as Korn, The Offspring, Avenged Sevenfold, and The Dirty Heads all have members that call this surfer’s paradise home.

From the entire Pacific Dub family, we thank you for your continued support, and look forward to releasing new music and seeing you at a show soon.

Saltwater Slide
Saltwater Slide is a San Antonio-based reggae/rock band that has quickly become a staple in both local and regional circles. Those who are familiar with their music are accustomed to their positive, relatable lyrics, high energy live performances, and active contribution to their local community. You can catch the guys at their annual Reggae Beach Cleanup in Corpus Christi, their band-managed Adopt-A-Spot on Mulberry road in San Antonio, or at venues all throughout Texas and beyond.

Saltwater Slide has been inspired by acts like Fortunate Youth, Passafire, The Expanders, Arise Roots, Iya Terra, Tribal Seeds, Dubbest, Roots of a Rebellion, Pepper, The Skints, Rebelution, and more, although their unique style is hard to miss and harder to forget.