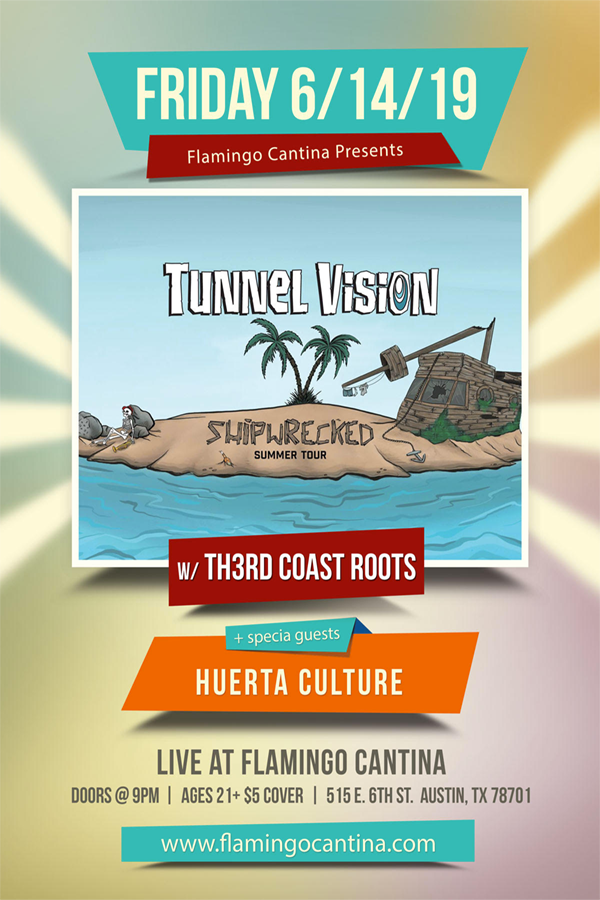 Tunnel Vision is quickly becoming Southern California’s favorite new Surf, Reggae, Ska band. The band is comprised of five musicians who grew up in the San Clemente, area with instruments in their hands and skateboards and surfboards under their feet. Tunnel Vision originally formed as a three-piece band, with Hayden Hanson as the lead singer and guitarist, Jacob Hernandez on bass, and Tanner Payan on drums and additional vocals.

Growing up in SoCal, the band was heavily influenced by the Punk Rock, Reggae and Ska Music of bands like The Descendents, Black Flag, Misfits, Sublime, Slightly Stoopid, The Expendables, NoFX, Rancid, and Reel Big Fish, etc. The boys have all worked in the surf industry for years, starting out in retail for Rip Curl and moving on to manufacturing surfboards for Lost Enterprises.

Tunnel Vision recently increased the band from a three-piece to a five-piece by adding Doug Alani and Matt Risley. Matt Risely & Doug both met the guys through their connections with Lost’s retail store, Catalyst. Matt is Texas surf transplant. Matt plays keys for the band and is an avid Surfer and Skateboarder as well. Doug brings his mad saxophone skills to the sound of Tunnel Vision, when he is not in the courtroom tipping the scales for justice, he is cranking out tunes with Tunnel Vision.

Th3rd Coast Roots was formed in late 2017 by four humans that love music with undeniable passion. Although we all love music and have various backgrounds and experience levels with playing music we never thought that life would take us on this journey that is now the band Th3rd Coast Roots.

We have a multitude of musical influences that we all bring to the table that creates our sound. This ranges from reggae and any of its sub-generes to rock, hip hop, and pop. We are on a mission to bring joy, education, unity, and awarness to the world as many of the other great reggae bands that have influcnced us have done before us. We are immensely aware that we are nothing without our fans and we recognize without doubt that they have been the soul reason for our success since day one.