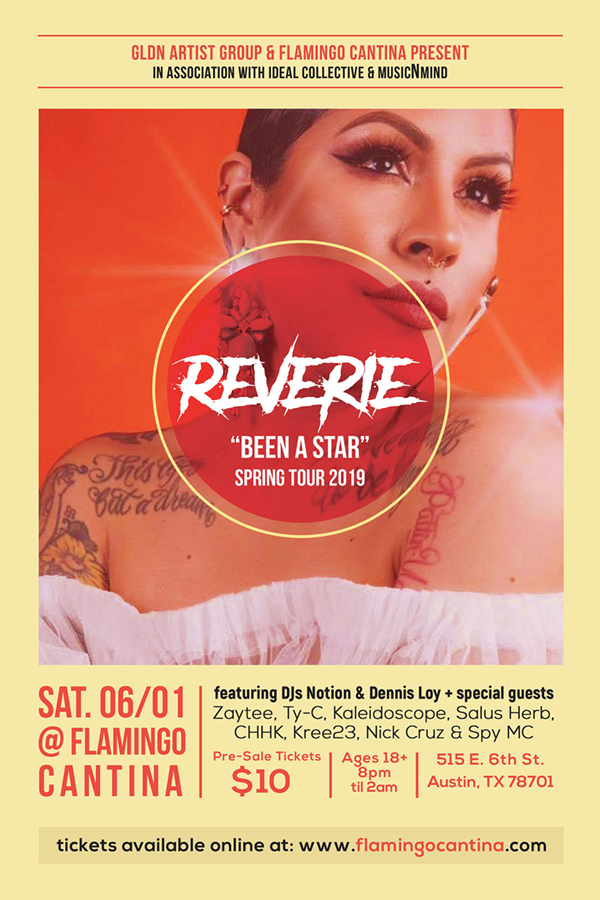 Join the event on FB here

*** Reverie was raised by a single mother in Northeast Los Angeles, Highland Park. Her household was full of dysfunction & she ran away for the first time in the 3rd grade. Her poetry was always her safe haven. She frequented the school counselor, detention & was suspended often. Despite her behavioral issues, she maintained good grades & even had her poetry & art published. In the 7th grade, Reverie discovered “underground hip hop” & her poems transitioned into raps.

In high school, Reverie obsessed over graffiti, which lead to her first arrest & fights, which eventually got her expelled from school. She began kicking it with a gang & heavily abusing drugs to mask her depression. Louden, her brother & now producer, was selling crack to feed his heroine addiction, got stabbed & shortly after was sentenced to 1 year in a juvenile detention center.

In hopes of a second chance at life, Louden & the family moved to Washington, where they began to record music. In 2009, they released Reverie’s first mixtape ever, ‘Castle In The Air,’ & within 24 hours, it got 3K+ plays. It was then that they realized their music could become something much bigger.

9 years & 10 chronicled projects later, Reverie regularly tours all over Europe & USA & has dedicated fans around the globe. She & Louden still record music together regularly & have cultivated an organic, cult-like following, which they call ‘Satori Mob,’ which is also the name of Reverie’s urban wear clothing brand. Hip hop saved their lives.